Presented at the 2010 Junior Science and Humanities Symposium

Circle-circle collision modeling is an important component of many simulations and games today. For some software, accuracy takes precedence over speed, and thus perfect circles, rather than polygons or bounding boxes, must be used, in addition to continuous collision detection. This means that there should be no allowance for circles going "through" other circles, a guarantee paid with extra computational time. Instances where this extra accuracy may be useful include pool, air hockey, and golf. Fortunately, between circles, such extra computation is minor, as collision detection and response between moving circles is mostly linear algebra and algebraic manipulation.

The algorithm in this tutorial is intended to accurately find the location of the collision and calculate the resultant velocity without using discrete time steps (moving the circle forward until a collision occurs). Thus the algorithm works with dynamic circles that respond to impulse forces. A continuous a priori approach to collision detection is used, meaning a collision is found before it occurs and then corrected. A posteriori approaches are discrete, using only the static circle collision portion of this algorithm, and only detect a collision after it occurs. Such an approach may be faster, but is inherently inaccurate.

This tutorial assumes basic knowledge of a programming language (Java in particular) and knowledge of basic algebra and geometry. Circles in this algorithm are assumed to be non-rotating.

The Closest Point on a Line to a Point Algorithm

Before moving circles are considered, the simpler case of two non-moving circles should be considered first. A collision in this case is actually an intersection of the radii, or an overlap between the areas of the two circles.

Even though when circles are moving and the moving circle collision algorithm works correctly, then an overlap should never occur, but calculations are not always precise and the occasional overlap may occur. Whether or not this comes into play depends on the method used to select objects for collision testing.

Once an intersection is found, the circles must be moved away from each other so that they no longer overlap.

When one circle is moving, the situation becomes more complex and determining the location of the collision is no longer trivial. Linear algebra can be used to compare the velocity of the moving circle with the position of the non-moving circle. Thus whether or not a collision occurs can be determined and even the exact location. Then, with the use of physics and more algebra, the resultant velocity can be found.

One way to think of collision detection between a dynamic circle and a static circle is checking whether or not the area swept out by the moving circle overlaps the static circle. Unfortunately, this is difficult to calculate and doesn't give the location of the collision. Another way is to use linear algebra to find the location of the collision, and if that isn't possible, then no collision has occurred. 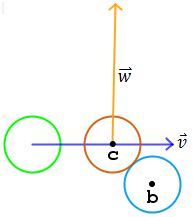 Collision response consists of solving momentum and kinetic energy equations for the final velocity of the object. All collision conserve momentum, while elastic collisions conserve kinetic energy in addition to momentum. The law of conservation of momentum states that the total momentum, or mass times velocity, of a system before a collision is equal to the total momentum after the collision. This is stated in the equation below:

Conservation of energy, is a bit more complicated. Energy is half of mass times velocity squared, and follows the same principle, it is the same before and after a collision if the collision is elastic. Elastic collisions lose no energy.

Going from one moving circle to two moving circles is easy - just change the frame of reference to one circle, since the circles are moving at constant velocity. Do the collision detection and response, then switch everything back to the original frame of reference. What does change is the equation for collision response, because the velocity of the second circle must be taken into account.

Note that the notation changes from a for the first circle to 1. The second circle is 2.

Starting from the simplest case of two non-moving (static) circles, and moving up to two moving circles, we have developed an algorithm for circle-circle collision detection and response. Most of the time, the above algorithms are combined into one to cover nearly all possible cases. Such a task consists of checking the velocity of each circle and using the appropriate algorithm for the situation. Once you've done that, you've got a very accurate circle-circle collision simulator! To fully utilize the algorithm, it should be in some sort of loop that selects the circles to be compared. Often this is simply just a doubly-nested for loop that goes through the list of circles, running the collision detection algorithm on each of them.

Precision and accuracy were the highest priority in the development of this algorithm. If speed is a concern, bounding boxes may be preferable to bounding circles, especially if sprites are used. Otherwise, pruning methods used to reduce the number of collision tests necessary would certainly reduce the impact of this algorithm in a time-critical application.

One may note that this algorithm only works for two circles that are colliding. What happens when there is more than two circles in a simulation? This is the focus of my paper, which treats each collision as independent and considers the case of one circle colliding into multiple circles. Yet it doesn't cover another issue: what happens when more than two circles collide at the same time? That, as of now, is an unsolved problem.